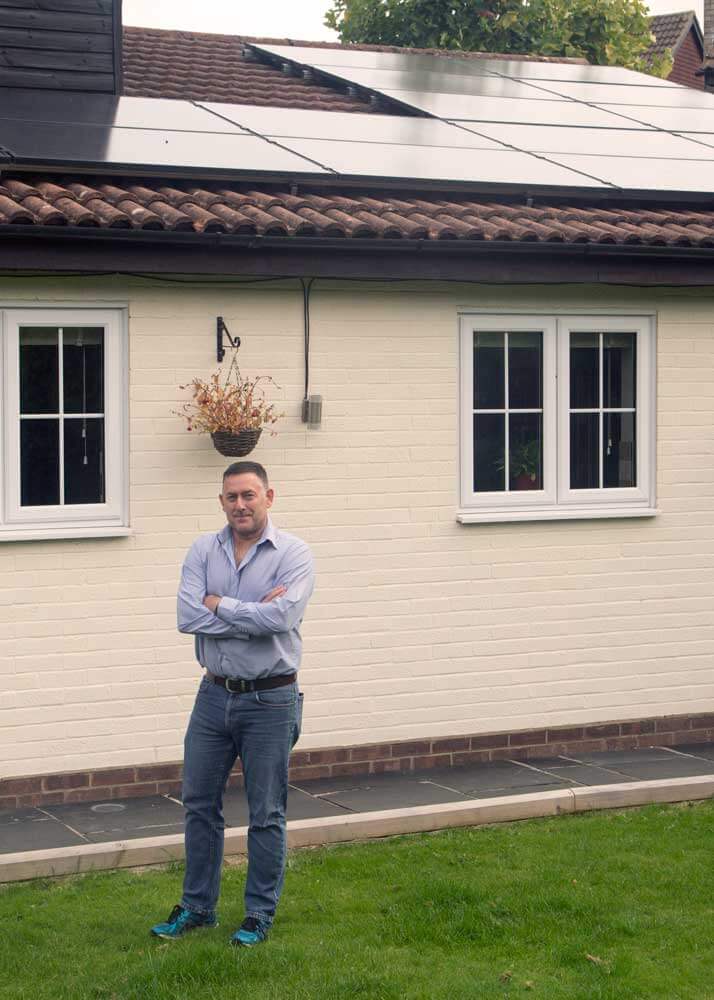 Tony and his family live in what looks like an ordinary four bed detached house in Hampshire. Like nearly a million other homes in the UK, they have solar PV on the roof. However, inside their garage resides a technological marvel: a battery is connected to the solar system on the roof. By combining a battery with their existing solar panels, the family is making a massive saving on their energy bills.

What can we learn from their first 75 days?

In August 2015, the family had solar panels installed on the roof. Since then, they have adapted their new habits in their daily routines in order to use as much of the solar electricity generated as possible. When Tony or his wife is at home during daylight hours, when the solar panels are generating the most, they run the dishwasher and washing machine. Their diligent behaviour means that by consuming solar electricity rather than grid energy, they reduced their electricity bill by around a third every year.

Tony says, “One of the best decisions we ever made was installing solar because we managed to significantly cut our electricity bill as well as generate an income from the Feed-in Tariff. And this will continue for the next 25 years, so it’s really a long-term investment. Cutting our carbon footprint was important to us too.”
Their energy needs are comparable to many millions of other homes around the UK, where a typical daily routine means most electricity is needed first thing in the morning to run the kettle toaster and power shower, and again in the evening when lights, ovens, TVs and computers are powered up. This routine means that the family’s energy needs often fall outside daylight hours, when their panels will be generating the most. They also realised that their solar panels were generating more electricity during the day than they were able to use.

Tony and his family wanted to be able to make use of this excess energy; so since the middle of August Tony started working with Solarcentury to trial a battery in Tony’s home; the battery stores the solar electricity generated during the day, ready for use at night.

“Having the battery means we don’t need to remember to run the washing machine during the day – we can now run it during the day when the solar is working or at night when the battery is full. It makes little difference. The battery has certainly made our lives easier.”

On top of these savings, Tony continues to earn the Feed-in Tariff for the solar electricity generated by the panels on the roof.

What the figures tell us

• On August 24th it was so sunny that the solar panels and battery provided almost all (93%) of the electricity they consumed that day!

• During the 75 day trial period, their electricity bill was 57% lower than if they had relied solely on electricity from the grid.

The benefits are not limited to providing Tony with cheaper electricity bills. Online monitoring (which comes as standard with high quality battery installations) is helping the family to reduce their energy consumption.

Tony said, “Looking at my electricity consumption on the web portal one weekend, I notice that my electricity use was unusually high. I realised that my son had left the outside light on whilst he had his friends over for a party. I never knew the bulb was so powerful! The 300W bulb in my floodlight has now been replaced with a more efficient one, so I’m saving energy and therefore money. I’ve also shown my son how to turn the light off!”

At Solarcentury, we believe that the UK is on the cusp of a revolution in the way we generate and store electricity. Energy storage is booming around the world. In Germany last year, over 40% of all new solar installations were installed with batteries. Analysis by the Renewable Energy Association has shown that 1,500 UK homeowners now have storage.

As electricity prices rise, and battery prices fall, more and more homeowners are interested in increasing the amount of electricity they can save by adding battery storage to their solar system.

If you’re considering battery storage for your home, get your estimate here.

Get an estimate
Back Next