Keeping us in the loop

There’s a lot of information to keep on top of, and not enough hours in the day. So we’ve downloaded our favourite commentators on the climate, covering social, podcasts and newsletters.

Eric Holthaus – giving real-time warnings and some hope along the way.

Eric is a meteorologist and climate journalist. He maps extreme weather events and does his best to sound the alarm for people who may be affected. But more than that – he reaches out and offers support, and he philosophises. His book, The Future Earth, is deemed “Hopeful and prophetic”. Right now, it’s this tweet that’s blowing our minds.. 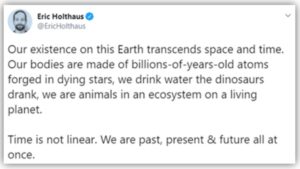 Carbon Tracker is an independent think-tank carrying out research on the energy transition for the financial community. They wrote the first reports on stranded assets with their infamous report on unburnable carbon. They align climate messaging with figures and currency which are easy to compare and difficult to ignore. It’s these reports that politicians and investors are taking into the boardrooms as evidence for the systemic change required.

In 2019, US Democrat AOC (as she’s fondly known) launched her plan to fight climate change. Not only did it cover the obvious low carbon initiatives, but it also grasped the ultimate concept of a green new deal; a plan to battle economic and racial injustice, reducing inequality, whilst building a sustainable future.

She’s progressive, inspirational and a beacon of hope for many. With 8.5 million Twitter followers her words have some serious clout.

Michael is a climate scientist, author and winner of the 2020 World Sustainability Award. He researches and models change caused by the climate, and has won multiple awards for progressing the field. His voice is gutsy, authoritative and straight-up – not afraid to challenge the establishment (especially politicians). He lays out the facts and the science allowing you to make your own obvious conclusions. He’s also the man behind a free online course to educate yourself about the latest climate science.

Greta Thunberg – inspired a global youth (and less-youthful) rebellion: “I’ve learned you are never too small to make a difference. And if a few children can get headlines all over the world just by not going to school, then imagine what we could all do together if we really wanted to.”

In recent years we’ve seen growing concern for the climate crisis, people and companies wanting to mitigate their damage to the environment. This timeline corresponds with the rise of Swedish schoolgirl and activist Greta Thunberg.

From entering a local competition in 2018 at the age of 15 with her essay on climate change and missing her lessons on a Friday while striking in front of the Swedish parliament building, she has gained such proliferation that Trump feels the need to belittle her. Her 2019 campaign, FridaysForFuture strike events involved 214 countries around the world and 14m strikers. Even David Attenborough is in awe of her achievements, and so are we.

We can’t miss Jeremy from this list. His conversational tone challenges and debates (– HIS VIEWS ARE ENTIRELY HIS OWN say our PR team on regular occasions). You can be assured he is well-abreast of, if not advising on, the most important climate and energy debates, whilst meticulously documenting the changing price of energy alongside the growth of renewables and subsequent responses by corporates and policy-makers.

In 1998 Leonardo established a foundation, supporting projects that ‘build climate resiliency, protect vulnerable wildlife, and restore balance to threatened ecosystems and communities.’ It has provided over $100 million to projects.

The Foundation’s most recent focus is climate change and biodiversity loss. It merged to create Earth Alliance, led by renowned scientists who work to protect ecosystems and support renewable energy.

For Solarcentury UK, James is a go-to, trusted source of news – guaranteed to be up to date and on point. If we only followed him, we know we’d be in safe hands.

He is founding editor of BusinessGreen, the online hub for news and opinion on the green economy.

How to save a planet – committed to seeing us through.

This podcast is hosted by the winning combination – Alex Blumberg, phenomenal reporter and storyteller, and Dr Ayana Elizabeth Johnson, climate scientist. They’ve committed to reporting every week… until the job is done. That’s somehow incredibly reassuring.

Sustainababble – “Trying to be cheery in the face of impending ecological disaster.” Includes jingles.

To pull off light-hearted conversation about the bleakest of topics is quite a feat and deserves a place on this list.

Ol and Dave, both very well informed having worked for environmental charities, manage to explain the most complex issues in simple terms. With guests discussing sustainable music tours to eco-anxiety to palm-oil, they cover all bases.

Hot Take – tells us WTF it’s all about

A newsletter and a podcast put together by Amy Westervelt and Mary Annaïse Heglar. They’ve both been writing about climate for years and have a genuine no–nonsense approach to discussing what’s going on, with doses of exasperation, humour and plenty of swearing. Every week, Mary and Amy curate the best in climate writing.

Newsletters start: “Dear Hot Cakes”. And with that, they’ve got our sign-up.

He’s an author, educator and environmentalist who set up 350.org. He writes beautifully. Quoted at random: “there’s nothing quixotic about the Green New Deal. It’s on the shelf, waiting to be taken down. Waiting, in fact, to be financed: the key role of the federal government here is not to pay for rebuilding people’s houses and buildings but to prime the pump so that private capital can do the job, allowing most of us to reap real savings from radically reduced energy bills.”

Carbon Brief – it’s got you covered.

Carbon Brief is a fantastic source of data-driven articles and graphics to help improve our understanding of climate change, both the science and the policy response. They publish a wide range of content, including science explainers, interviews, analysis and factchecks, as well as daily and weekly email summaries of newspaper and online coverage.

You’ll definitely learn something from this one – and they produce really great infographics to enjoy.